To live in a royal palace is not a dream anymore 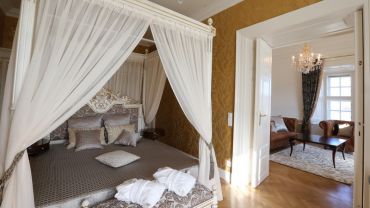 No wonder, those who have once visited Versailles, the Tower of London or the Winter Palace are dreaming of living in a royal estate and to feel like a king or a queen. In Austria, their dreams can come true. The famous Schönbrunn Palace in Vienna has become a hotel at the end of April, 2014. Now, tourists can not only go sightseeing around the residence of the emperors of the Habsburg dynasty, what definitely takes them not less than a day, but also to stay here at night in one of the rooms. Part of the royal residence was remade into suits – the rooms with the high standard of comfort. A suit includes two bedrooms and bathrooms, a sitting-room, a hall and a kitchen. A fantastic panoramic view of the palace park opens from the windows of the apartments. The price of the suit starts from 699 EUR per night for one person. You can also go for a walk in a carriage, the butler is also at your disposal.

Schönbrunn is the main attraction of Vienna and probably the whole Austria. This is the building of the 17th century created in the style of Austrian Baroque. It has a luxury interior with more than 1400 rooms and halls and more than 40 of them are open for visitors. Nearby, the wonderful park with statues and fountains is situated. Here you can also find a gloriette (an open pavilion with a colonnade), an orangery, world’s oldest zoo – Schönbrunn Zoo – and a labyrinth. In a café situated in the park, strudel shows are held, where guests can taste desserts as well as learn how to cook them. The palace is included into the list of UNESCO’s World Heritage.

The way the palace looks today was created in the 1740s, at the times of Empress Maria Theresa’s reign. During the time of its existence, the palace hosted Napoleon, Marie Antoinette the Queen of France, Franz Stephan I the Emperor of the Roman Empire, Franz Joseph I the Austrian Emperor, Empress Elisabeth of Bavaria and even Mozart performed here. After the fall of the Austro-Hungarian Monarchy in 1918, the park and the palace were opened to people. Nowadays, this place of interest attracts more than six million of visitors per year.

Today, hotels located in ancient palaces or temple buildings become a worldwide trend of the hotel and tourist business. Living in a place surrounded by exotic gardens and elegant towers, picturesque ponds and beautiful sculptures, paintings and antique furniture is one of the best ways of relaxation for people. Some of the palace-hotels have already gained a huge popularity: the hotel Dukes’ Palace in Bruges, the American Colony Hotel in Jerusalem, the Cliveden House in England and many others.

Majestic atmosphere of different centuries, outstanding works of art and gardening, as well as real royal feelings are waiting for tourists in the hotel of Schönbrunn.

Date: 17 June 2014
Vienna Card – excellent when sightseeing in Vienna
In April 2014, Vienna Card, a new travel pass, was launched in the capital of Austria. It gives an opportunity of unlimited travelling by all means of public transport within 48 hours.
Feedback